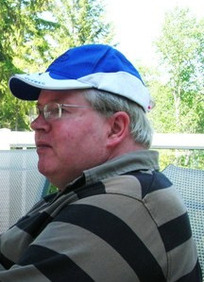 Mae pont i groesi pob anhawsted.  Welsh for
"There is a bridge to cross every difficulty"
Richard was a keen athlete and a scholar until MS struck at age 31. He struggled to maintain  a certain lifestyle over the years despite his disability. He was a wonderful, caring and cheerful person who refused to let personal events slow him down.
He  joined the Shuswap Writers group 10 years ago. Once Richard got to know everyone he was not shy to voice his opinion on certain topics. Richard faithfully attended our monthly Writers Coffee House and would sign up ...not for a reading of his written work but an oral word challenge that the MC would give him. Richard could run with a word, giving it's definition, and using it in various sentences. Richard could make up quirky stories causing much laughter to all. He loved the challenge of words.
Some years his attendance was sporadic, but as writers we built close friendship and trusts, and we always encouraged him to rejoin us when he felt ready. His writing subjects leaned mostly towards his MS, disabilities and misfortunes. His good days were reflected in his very witty stories or an account of an outing he had been on.
We will miss Richard, not only because he was a member , but because he was a caring soul and stood up for the good of mankind.
When his ship reached the other shore he no doubt is  free of all that inhibited him here          on earth.
Write on Richard, write on! 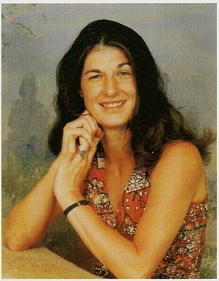 Bonita joined our group in the early 1990's as she was taking a children's writing course by correspondence and needed feedback and support. It was quite apparent even then she had a passion for nature as she wove her children's tales around animals, insects, flowers and fauna. Her other artistic talents included stain glass designing, arranging flower bouquets, bead work and photography.


Bonita's writing abilities were soon recognized and publishers  offered to put them into print. Unfortunately, both book deals fell through and neither of her children's nature books was published. Over the years Bonita fought health issues that interfered with her writing. She persevered and turned to writing about nature with the library as her main educational source.


So successful in her field was she, Bonita landed a column with the Shuswap Market News and later in the Friday A.M., and went on to write for many years until her death. Bonita had some of her writing published in past Shuswap Writers Group Kaleidoscopes and was looking forward to seeing her stories published in Kaleidoscope   V. 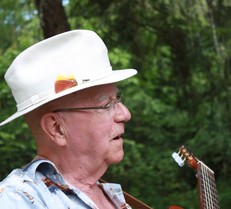 Dick joined the Shuswap Writer's Group in 2008. He introduced himself as a poet, but it didn't take long to realize he did more than write poetry. He was an author, a captivating storyteller, a musician and a songwriter.
He was a major force in keeping our coffee house successful. We could always count on Dick to bring out his guitar to play and sing. This was especially true not only at the coffee house but any gatherings.
In 2011 Dick launched his CD, Dogwood Wine. On the CD  his passion and pain comes through and  you are transported to the time and place  he sings about.
April 2012 the Shuswap Writer's Group published our book Kaleidoscope V, an anthology of short stories and poems. Dick has several poems and one story included in the book. The book also has three of his drawings.
Dick's talent shone through in one of his final performances  in May 2012 at a coffee house our writer's group hosted for Word On The Lake - A Festival For Readers and Writers,  He sang a song he had written for the occasion. When the song ended , the applause was a tribute to a true entertainer. Some of the comments heard  were "beautiful heartfelt performance", "tender song"----" a memorable performance".
Dick never hesitated to join committees or assist in some of the endeavours our group was involved in. His contributions to our group were immeasurable. His  zest for life and love for the written word will be remembered.
In Dick's own words "Somewhere between crotchety and senility you can find Dick Quaife; a BC born gypsy poet, he rides the river of life in a classic guitar case, paddling with his pen." 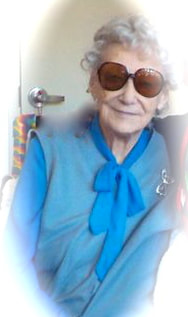 Ethel A. Keating 1919-2016
There is no doubt that Ethel, a past President of the Shuswap Writers' Group in the 1990's, wrote to her last days at age 96.
She had such a passion and talent for both telling and writing stories about her life and family, many of them humorous. For a few years Ethel wrote a small column for one of the local newspapers relating stories about her background and family happenings.
We were so pleased she could come and particiapte in the 25th anniversary of The Shuswap Writers' Group held in the Arts Centre in 2013.
Ethel has two stories and a poem in SWG's Kaleidoscope 1v.
This is one of Ethel's poems;
​                      Springtime
Springtime is coming with breezes and sneezes and stuff;
Daffodils blowing and crocuses growing,
Forsythia glowing like bushes of sunshine.
Snow will be melting and water will pour
Down off the mountain with gurgle and roar.
We'll hang up our aprons and head out the door
We'll forget the warm woolies and all winter gear...
Then the sniffles and sneezes and wheezes-
Oh dear! 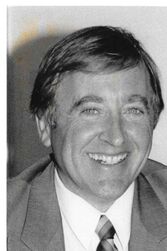 Blake  always delighted us with his unique sense of humour. He loved to write quirky stories about the president of the USA. He joined our writers group only a few years before his passing. He was never without a comment or two about the news of the day. When he talked about his family you could hear the pride in his voice. He shared with us the fun of raising a family and I am quite sure they  could turn the tables on him once in awhile.He was a man of many talents and he served as head of many organizations over the years. He had a great passion for the North West Territories where his wife  Maureen  and family lived for many years. He served the communities well he lived and worked in  also took time to travel and take part in sports.
He left us too soon and with him went that great wit and sense of fun that he shared with the writers group.